There was a time not so long ago that space was known as the ultimate frontier – the exclusive territory of governments and a small handful of aerospace companies that could bring together technology and resources to leave the Earth’s atmosphere. Today – just as we have seen with technologies such as artificial intelligence and quantum computing that were once only available to universities and research laboratories – space technologies are being democratized in part thanks to the cloud. I finished with last year prognosis that space is an area where we are seeing the greatest advances in the new application of cloud capacity. Now, just six months later, a new crop of space pioneers is preparing to recharge their efforts with cloud technology. In an evolving commercial space industry, where even small startups can make a big impact by adopting innovative new space technologies, the cloud is critical to accelerating experimentation, expanding automation, and generating deeper insights.

Getting to this point of expanded commercial activity was no coincidence. In recent decades, governments have worked together to create the conditions for sound space conditions in the private sector. They not only invested in research and development of basic technologies, but also supported these space companies by purchasing goods and services. Just as importantly, I think they have brought together stakeholders from across industry and the public sector to discuss potential problems, formulate voluntary standards and identify best practices in the hope that space will become a sustainable and usable environment for all – now and in the future. Thanks to these efforts, the industry has the opportunity to continue its rapid growth and improve the quality of life for all by providing more reliable and cost-effective use of space.

I believe that this next era of space innovation will have a dramatic and positive impact on quality of life by helping us solve many of the most difficult human problems. Think about how the abundant number of small satellites in orbit means that scientists are beginning to benefit from a 24-hour, highly detailed flow of information on our planet, regardless of weather conditions. They can use this to study our climate, improve agricultural production, conserve wildlife or secure water supply. Regardless of the application, democratizing the availability of high-resolution satellite data will pave the way for a deeper understanding of our planet. Pretty great stuff, and it’s just one part of the opening space story.

Using the cloud to support public and private space operations

Cloud companies like AWS have a special role to play in supporting this type of innovation. First, we can give new entrants the scale, agility, and global dimension they need to develop solutions, but we can also help incumbents streamline operations. In the case of satellites and space-based robots, it means providing tools for quickly loading, processing, sharing, and exploring huge sets of data. This is not something I get to say every day, but let’s look at Mars for examples of two successful missions in February. On the surface of the red planet, AWS processes and hosts scientific and technical information collected by NASA Mars Perseverance driver. As a result, the NASA JPL will be able to process Martian data on Earth faster than ever before. Meanwhile, Mohammed Bin Rashid Space Center Hope Probe mission relies on AWS ‘advanced technologies to process and analyze vast amounts of data and images to help scientists study the layers of the Martian atmosphere. And what can it tell us? First, it can give scientists a better understanding of the causes of the planet’s drastic climate change.

Newer space players face similar challenges as their public sector counterparts. As we know, data is at the heart of everything, and the best insights are delivered in near real time. To get there, commercial satellite operators are introducing technologies like machine learning that help automate the enrichment and analysis of large amounts of data. AWS client Fireball International shows how critical speed is to use satellite imagery to protect communities from forest fires. They process more than 2.5 million images a day with AWS to detect the outbreak of a fire within three minutes of ignition and automatically notify first responders to help lives.

As a basis for future space cooperation

The huge work already underway is just a preview of things to come as more and more companies start developing applications and services, especially in startup mode. We launched the AWS space accelerator in March to catalyze more innovation and support the most innovative startups that will help shape the future of aviation. We decided to work with the Seraphim in this endeavor as they are one of the world’s leading investment groups focusing exclusively on the space industry.

Today, I’m excited to announce the 10 startups we chose to participate in the accelerator’s first cohort: Cognitive Mode, D-Orbit, Descartes Labs, Edgybees, Hawkeye 360, LeoLabs, Lunar Outpost, Orbital Sidekick, Satellite VU, and Ursa Space. These U.S. and European companies cover a wide range of space capabilities that affect the planet today, as well as humanity’s approach to working and living in space in the future. We selected them from more than 190 proposals from 44 countries – an inspiring measure of the extent of ideas spread around the world.

Over the next four weeks, we will immerse these companies in the cloud with hands-on technical training such as machine learning and high performance computing. We give everyone up to $ 100,000 AWS Activate an honor to try out how they can change their knowledge and activities in the cloud. To facilitate specialization, they have the opportunity to dive deeper during workshops into services such as AWS Robomaker for robot developers, AWS IoT for Greengrass IoT application management, and AWS Ground Station with satellites for communication and satellite data management. We believe these services are the key to making the commercial space industry more efficient. On the business side of the house, we offer them mentoring of subject matter experts as well as business development and investment advice. As we like to say on Amazon, “speed matters,” and our goal is to get these startups out in the second half of the short four weeks to prepare to make an even bigger mark in the space industry.

While space is (possibly) infinite, the first members of our cohort address an exciting but fortunately more limited set of challenges and opportunities. They have sought to expand what humanity can achieve while physically in space, as well as how we use space-derived data back to earth.

Space is, of course, a uniquely complex place to operate. At least so far, there is no fast access to redistribution, the ability to repair a broken part quickly and slow, low-bandwidth communication. As a result, space operations must be inherently self-sufficient and receive maximum value from each of the equipment and resources we deploy. Moon outpost prepares to meet these challenges with technologically sustainable space exploration solutions, such as stand-alone robots, that are not constrained by the high latency of the Earth’s remote control or the need for regular maintenance.

Nor does the magical appeal of space alleviate the burden of more mundane logistical concerns. Operators need to manage their satellites in orbit and address concerns such as positioning, diagnostics, communications, and hardware integrity. As space is activated, advanced cloud technologies can help satellite operators achieve better satellite command and control and improve situational awareness of other objects in orbit. Cognitive state, D-orbitand LeoLabs each address aspects of these challenges with features such as accurate tracking of space debris in low earth orbit, optimization of in-orbit satellite operations, and management of small satellite constellations.

Businesses need to return quickly to process, improve, and share information about space so that end-users can make the most of it and apply it to decision-making. However, think about how much knowledge is generated by the evolving ability to tolerate real-time consciousness on a planetary scale. It’s easy to understand why working in the cloud is so important, and we’re working to help Descartes Labs, Edgybees, Hawkeye 360, Orbital Sidekick, Satellite unitand Ursa Space improve their support for important needs with their space-based knowledge and insights. These companies innovate to support, for example, environmental and sustainability measures, as well as agricultural productivity, disaster preparedness, humanitarian aid and international security. They have already helped companies to operate transparently on their net commitments on carbon emissions by monitoring the amount of terrestrial biomass or measuring thermal emissions from man-made structures. They help farmers optimize the use of water and pesticides. They give firefighters an almost immediate awareness of new fires and give humanitarian first aiders a life-saving context by adding accurate geotag information and applying augmented reality to images.

Their relationship with AWS aims to enable the entire cohort to accelerate their growth and expand their impact. 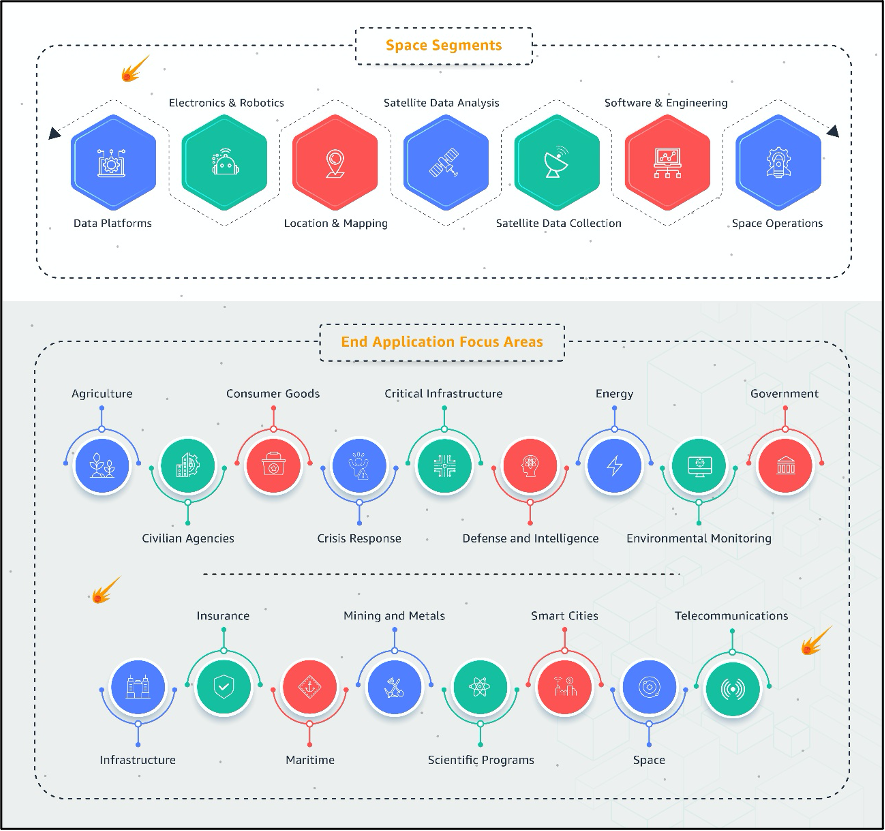 A brighter future from the darkness of space

It is clear to me that the potential is ripe for expanding the possibilities of space through, for example, satellite remote control and guidance, in-orbit autonomous features, and better communication solutions. I see space start-ups as essential to achieving this potential, and I’m excited to see how our first cohort continues to experiment and grow in the cloud. In addition, new best practices in security, trust and inclusion in the commercial space industry must also be necessary to realize our most positive visions of space. We need to actively channel how space capabilities are used to support shared economic growth, better resource use practices and human well-being. I hope that by leveraging resources like AWS Space Accelerator, we can increase collaboration to drive this innovation.

The 10 Runway Trends You’ll Be Wearing This Year

Samsung withdraws the Galaxy Z Fold 2 from its online store...

IaaS Provider: How to find the right choice for your business

MVP Carsten Rachfahl interviews me about my favorite Hyper-V features in...